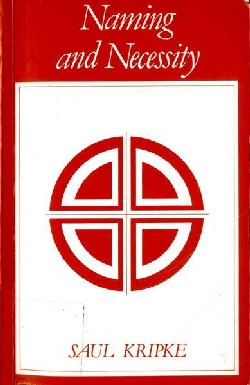 The ideas in Naming and Necessity evolved in the early sixties - most of the views were formulatedin about 1963-64. Of course the work grew out ofearlier formal work in the model theory of modal logic. Already when I worked on modal logic it had seemed to me, as Wiggins has said, that the Leibnitzian principle of the indiscernibility of identicals was as self-evident as the law of contradiction. That some philosophers could have doubted it always seemed to me bizarre. The model theoretic study of modal logic (`possible worlds` semantics) could only confirm this conviction-the alleged counter-examples involving modal properties always turned out to turn on some confusion: the contexts involved did not express genuine properties, scopes were confused, or coincidence between individual concepts was confused with identity between individuals. The model theory made this completely clear, though it should have been clear enough on the intuitive level. Waiving fussy considerations deriving from the fact that x need not have necessary existence, it was clear from (x) ▭ (x = x) and Leibnitz`s law that identity is an `internal` relation (x) (y) (x = y ▭ x = y). (What pairs (x, y) could be counter-examples? Not pairs ofdistinct objects, for then the antecedent is false; nor any pair of an object and itselr: for then the consequent is true.) If `a` and `b` are rigid designators, it follows that `a = b`, if true, is a necessary truth. If `a` and `b` are not rigid designators, no such conclusion follows about the statement `a = b` (though the objects designated by `a` and `b` will be necessarily identical). In speaking of rigid designators, we are speaking of a possibility that certainly exists in a formal modal language. Logically, we as yet are committed to no thesis about the status of what we ordinarily call `names` in natural language. We must distinguish three distinct theses: (i) that identical objects are necessarily identical; (ii) that true identity statements between rigid designators are necessary; (iii) that identity statements between what we call `names` in actual language are necessary. (i) and (ii) are (self-evident) theses of philosophical logic independent of natural language. They are related to each other, though (i) is about objects and (ii) is metalinguistic.