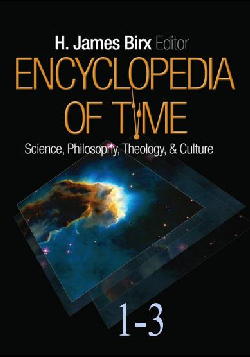 What is time? Did it have a beginning? Will it ever end? These are profound questions that have been asked by serious thinkers over the centuries, from early speculations among the ancient Greeks to the startling discoveries in the modern sciences. Both philosophers and theologians have offered dynamic worldviews to accommodate new facts and ideas about time and change. Because of its elusiveness, time still challenges those individuals who strive to understand and appreciate the flux of reality and the pervasive influence of time on all objects and events within it (including our own species). Perspectives on time range from subatomic particles to cosmic evolution. Temporal changes may encompass merely attoseconds or billions of years. Remarkable advances in technology, particularly in telescopes and microscopes, along with rapid improvements in computers, have greatly increased our scientific knowledge of this universe in general and our planet in particular. The history of life on Earth stretches back about 4 billion years, while human culture began less than 3 million years ago. Even so, this expanding cosmos is expected to endure for billions of years into the future. And, no doubt, human views about time will change over the coming centuries if our species survives. This encyclopedia surveys those major facts, concepts, theories, and speculations that infuse our present comprehension of time. Its inclusive orientation recognizes the contributions of not only scientists and philosophers, but also theologians and creative artists from various fields. Especially significant are the temporal frameworks that were offered by Charles Darwin (1809–1882) and Albert Einstein (1879–1955). To grasp the modern awareness and appreciation of time requires that an individual embrace both evolutionary biology and relativity physics. The awesome perspective of cosmic evolution now includes such incredible objects as quasars, pulsars, and black holes. The human mind struggles to glimpse an evolving universe with billions of galaxies, each with billions of stars. When looking beyond our planet into outer space, one actually sees this universe as it existed millions of years ago; as such, one is gazing back into time. Furthermore, when one digs deep into the earth, one is also going back into time: Rocks, fossils, and artifacts are the remains of evolutionary time.