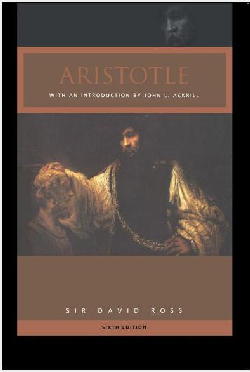 Written by renowned Aristotle scholar Sir David Ross, this study has long been established as one of the foremost surveys of Aristotle`s life, work and philosophy. With John L. Ackrill`s introduction and updated bibliography, created for the sixth edition, the book continues to serve as a standard guide, both for the student of ancient history and the general reader. Ross’s book gives a concise and comprehensive account of Aristotle’s philosophical works — and no better account exists. In this Introduction I will say something about Ross and about his book, and I will then outline some of the ways in which the study of Aristotle has developed in the years since he wrote it. Sir David Ross was born in 1877 and died in 1971. He made his mark in public life and as a university teacher and administrator, and he wrote influential books on ethics. But it is as the leading Aristotelian of the first half of the century that he will be most remembered. In a series of magisterial editions, beginning with that of Metaphysics in 1924, he brought to bear superb scholarship and exceptional sharpness of thought andclarity of expression. He was  familiar with the great achievements of nineteenth-century German philology, and he drew from it; but his great strength lay in his intimate knowledge of Aristotle’s works and in his ability to elucidate the texts and analyse the arguments. There is a refreshing directness in his approach, and an avoidance of pretentions or obscure jargon. The book is a straightforward account of Aristotle’s works, containing marvellous summaries of difficult theories and complicated arguments, together with brief but suggestive critical comments. It is not an elementary introduction for the absolute beginner: Ross takes for granted some acquaintance with traditional philosophical terminology. There are three types of reader for whom it will be useful. There is the general reader who is interested to know something about Aristotle. He or she will be well advised not to read the book straight through, nor to start at the beginning; the easiest approach would be through the chapters on ethics and politics and then on philosophy of nature. Secondly, the university student will find that a good framework and starting-point for his work on any part of Aristotle will be provided by the reading of the relevant chapter or section of Ross’s book. Finally, the professional will read (or re-read) Ross with interest and profit — to admire the clarity of the exposition, to evaluate the comments, and to reflect on the ways in which the study of Aristotle has developed since Ross wrote.